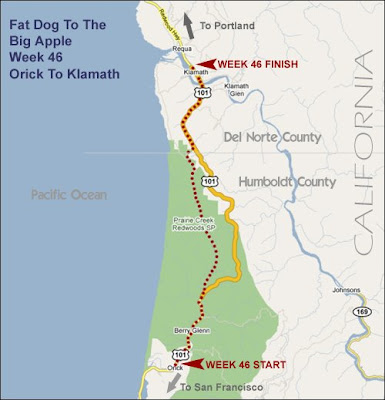 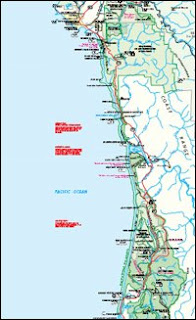 Leaving Orick behind, Amy and I entered Redwood National Park. Or at least I think we did, it was all very confusing. Redwood National Park was established in 1968 with the joint objective of protecting the old growth coast redwood trees and also promoting tourism in the area. There were a number of State Parks already in existence and these became partly incorporated into the new National Park, but they also retained their individual entities. Add to all this that the area was later designated a World Heritage Site and, even more recently, an International Biosphere Reserve, and you can see how confusing it gets. At any one time you might be in a National Park, a State Park a Heritage Site or a Biosphere Reserve, or all four. The giant trees must get awfully mixed up and it is a miracle that they manage to grow up so tall and straight. We had been provided with a map which marked all the different parks, sites and reserves in different shades of green but eventually Amy decided that this was the cause of even more confusion so she chewed it up.

As we walked along I tried to interest her in the dominant fauna and launched into yet another lecture about Redwood trees. "There are three members of the redwood family", I told Amy : "coast redwoods (Sequoia sempervirens) of the California coastal fog belt, giant sequoias (Sequoiadendron giganteum) of the Sierra Nevada, and dawn redwoods (Metasequoia glyptostroboides) of central China". "Which is the largest?", I felt Amy wanting to ask me (sometimes I have to prompt some of her questions as she is not over loquacious in the mornings). "Good question", I answered obligingly. "Coast Redwoods, like these", I pointed to a convenient tree we were passing at the time, "are younger, lighter, but taller, whereas giant sequoias are older, broader and heavier". She looked a little unsure about my explanation. "Think of it this way", I told her, "Guy is taller than you" - Guy is Amy's Great Dane friend - "but you are fatter". Following that little bon mot, she didn't speak to me for the rest of the day. 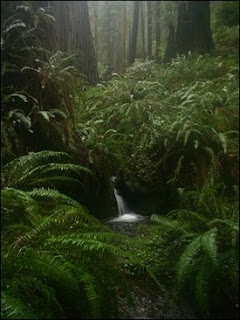 Not that I minded that much as that particular day we were walking along the Newton P Drury Scenic Parkway, a ten-mile paved road which runs through old-growth redwood forest in the State Park (or the National Park or whatever). As Amy kept a silent look-out for the ever-present Roosevelt elk I mused on the subject of Newton P Drury. If you are the kind of person who wants to leave a lasting memorial when you finally quit the mortal sod, you can do worse than becoming a State or National Park Director. In lesser professions you might get a gold-coloured watch when you retire and a short paragraph in the company newsletter when you die, if you are a State or National Parks Man (or woman) you can almost guarantee a couple of small forests, a woodland glade, and a brace of campsites being named in your honour. 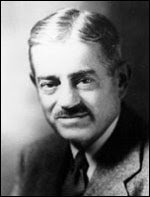 Old Newton B did quite well out of his ten years as Director of the National Parks Service in the 1940s, he had two redwood forest groves, a 10,000 foot mountain peak and a Scenic Parkway named after him. "What do you think they will name after me?", I asked Amy as we walked along in the shade of the massive redwood trees. She didn't reply - she was still not talking to me - but she stopped and had a good sniff at a steaming pile of elk dung. It said it all somehow. 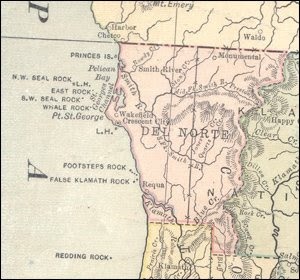 Towards the end of the week we rejoined Highway 101 and experienced the thrill we always felt when we crossed a County Line. Here we were in the last county in California - Del Norte County - which as well as being the most northerly county is also one of the smallest of the rural counties. During my time in California I had become something of a County bore, carrying around with me a host of facts and figures about some of the more obscure counties that people just did not want to know about. Over the last few months I had liberally given forth from this fascinating cornucopia of knowledge only to discover that people had the habit of walking away from me when I was in mid-sentence. However, I had discovered that Amy could not use this gambit as she was attached to me by a long length of unbreakable twine, and so I once again attempted to educate her. Although this is now Del Norte County (and I should point out Amy that if you want to be taken as a local you should not pronounce the final "e"), it used to be Klamath County and before that it was part of Trinity County. I would like to pretend that Amy fained interest, but - truth be told - she didn't. But if I stopped talking when people didn't show interest, I would have led a quiet life. I continued. "There are only 30,000 people living in the County which makes it about the same size as a half-decent housing estate, but the population density is 27 people per square mile which makes it twenty times less crowded than England". I had just launched into a detailed analysis of voting figures in the County - it was, for example, one of the rare places on earth where more people voted for Senator McCain than Barak Obama in the recent presidential elections - when I noticed Amy trying to chew through her lead. I decided that she had suffered enough so I stopped talking and started whistling instead. 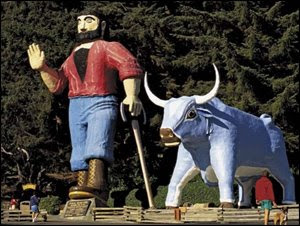 At the end of the week Amy and I whistled our way across the Klamath River and into the little town of Klamath. We were stopped in our tracks - and halted in mid-verse - by an extraordinary sight : a giant fiberglass carving of a bearded logger and strutting blue oxen. Amy gave a low whistle and I barked : or maybe it was the other way around, you get confused after walking through a redwood forest for a week. Which ever way around it was, we stopped to investigate. The statue, it turns out, is a 49 foot representations of Paul Bunyan and Babe the Blue Ox : heroes of American folklore who did things like create the Grand Canyon (when Paul got fed up with carrying his axe and dragged it along the ground) and cut down the biggest trees in the forest without breaking into a sweat.
Why exactly these fibre glass statues were in Klamath I wasn't sure but they were standing next to the entrance of something called "The Trees of Mystery Park" so I paid the $11 admission charge (reduced rate for Seniors, dogs get in for free) and had a look around. What we found inside is what the Guidebook calls a "8/10ths of a mile groomed interpretive trail through the awe-inspiring Redwoods of Northern California". I was not sure what a "groomed interpretive trail" was and Amy was getting a little agitated - she thought I had said a "groomed interlaced tail" - but it turned out to be nothing more that a walk passed a series of trees which had names like the Brotherhood Tree, the Cathedral Tree and the Candelabra Tree. It was all very jolly, but the best bit was the 1,500 foot Skytrail cable car ride. As Amy watched the little cable cars lurch into the sky I saw a look of pure panic on her furry face. The one salvation, I am sure she felt, was that there was little chance that dogs would be allowed to ride the Skytrail. How wrong she was. She barked and whined the whole 9 minute journey, but once her four feet were back on solid earth she remained remarkably well behaved for the rest of the day.
It was with a obedient and quiet dog that I sat outside the Klamath Shoping Centre cafe at the end of the week, looking back on our walk ... and planning another week ahead. 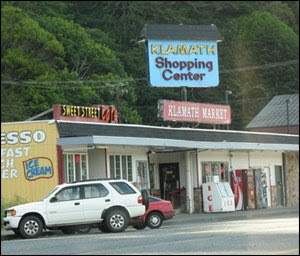 Posted by Alan Burnett at 07:16 No comments: