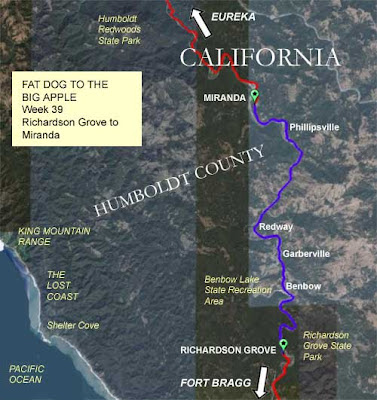 Amy and I left the tiny settlement of Richardson Grove and continued our walk north, following the course of the South Fork of the Eel River which would eventually lead us back to the Pacific Ocean. It had been weeks since we last saw the sea and we were beginning to miss the ever-changing vistas which only a coastline could provide. We were beginning to go a bit tree-crazy and I began to think lovingly of those islands which are completely bereft of trees. I mentioned this to Amy as we walked along Redwood Highway, but - thinking that I was going a little tree-crazy - she ignored me. 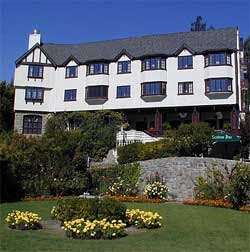 A few miles north of Richardson Grove you have two choices : the serious concrete and tarmac of Highway 101 - a serious road which hereabouts is called the Redwood Highway, and the more laid back, twist-here-a-bit, twist-there-a-bit, Benbow Drive. We took the latter which took us - after a suitable twist and turn - to the settlement of Benbow. Benbow has a golf course, an "RV resort" (it's a kind of up-market trailer park) and an Inn. I read to Amy from the brochure : "You would think you were in England instead of northern California when you first see the large Tudor-style Benbow Inn". She was somewhat confused by this and I could see her thinking "why would anyone walk the streets of England, imagining that they were walking the streets of Northern California, so that they could think they were in England instead of Northern California?". It was my turn to ignore her, so I carried on reading from the brochure. "The English theme continues as you step inside the lounge with its large antique fireplace flanked by comfortable sofas, antique chests, paintings, needlepoint, cherry-wood wainscoting, two grandfather clocks, potted green plants, and a splendid Oriental carpet. At tea time complimentary English tea and scones are served". "Can't you just imagine we were back in England?", I said to her as we gazed at the mock-Tudor facade. Her look said it all : "We are, you old fool".

The hotel was built back in 1926 and has a rich history. It was built by the Benbow family - nine brothers and sisters - and soon became a popular hide-away for the rich and famous. Guests have included the likes of Spencer Tracy, Clark Gable, Alan Ladd, Charles Laughton, Nelson Eddy and Jeanette MacDonald, Joan Fontaine, and Basil Rathbone. The Hotel and resort has everything a virtual traveller could desire and Amy was particularly taken with the "special doggie playground and the Salon'd Soggy Doggy™ Pet Wash which is complete with hot and cold water so fido can really be pampered". 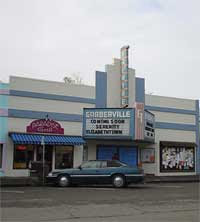 The next place of note was Garberville, a small town a few miles north of Benbow. It was originally called Dogtown, I informed Amy, but the local dignitaries thought that it needed an image makeover so they renamed it after the local postmaster, a certain Jacob C Garber. Amy showed the local dignitaries just what she thought of them in the way only a dog can. The town is kind of interesting with its fine old Theatre, its town square with weekly Farmers' Market, and its two local newspapers. Kind of interesting, but - if truth be told - not very. Amy and I had a quick pint at the wonderfully named Branding Iron Saloon (OK, I had a pint and she had a dish of water) and then we left town. Just round the corner from Garberville is Redway which is even more kind of forgettable. So we did. And we left.

North of Redway there is very little but trees, but there are an awful lot of them. Again there is a choice of roads : you can take the new Highway 101 Freeway or you can wander up the old road which is now known as the Avenue Of The Giants. "It's world famous", I tell Amy. "It's included in that book, 1,000 Places To See Before You Die". "It's trees", Amy replied. Or at least she seemed to. Perhaps I am going a bit tree-crazy. We pass through Phillipsville which is even less of a town than Redway. We check out the local beauty spot which is known as the Chimney Tree. It turns out to be a tree in the shape of a chimney. "Pretty cool", I say to Amy. Her diagnosis confirmed she starts planning the rest of the trip as a solo walk. Clearly I am on the verge of being institutionalised.

By the end of the week we reach Miranda which sounds as though it should be a big and exciting community. It isn't. The town has a post office, two restaurants, a motel, a market, a Seventh-day Adventist church, a Latter-Day Saints Church and a small, rural high school (grades 8-12), a gas station, and a gift shop. Oh, I almost forgot. It's also got an awful lot of trees.

Posted by Alan Burnett at 05:10 No comments: