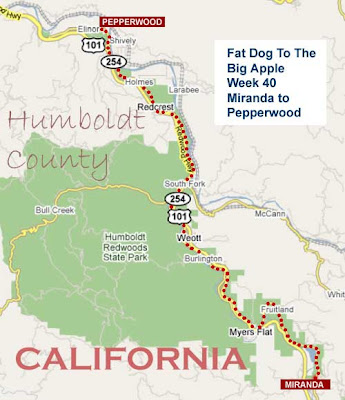 Amy and I are walking again: walking north, walking along the Avenue of the Giants. Following the Eel River. Heading first for Eureka, then for Oregon, then Seattle, and then .... well let's not get ahead of ourselves. 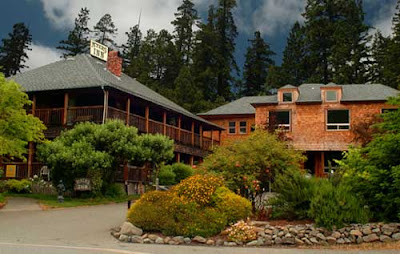 We sat and looked at the map at the Myers Country Inn, a few miles north of Miranda. It's a smart place: wood verandas, floral prints, all that kind of stuff. All very North Californian. But Amy didn't seem impressed. "This place is No. 24 in the list of 101 things to do in Humboldt County", I told her. "God help the other 76", her look seemed to say.

We followed the road north skirting Humboldt Redwoods State Park. As you walk by this massive 52,000 acre park, you have to admire the American approach to going back to nature. The campgrounds are all carefully set out with well-kept paved roads for your SUV. There are showers and toilets, picnic tables, and even wi-fi networks for your computer. But, as Amy was quick to point out, despite all the promise of going back to nature and the days of the pioneers, dogs are not allowed in most places. It's because you might chase the Grizzly Bears and give them a fright I told her. She ignored me: she was too busy composing a letter of complaint to Governor Schwarzenegger. It wasn't all endless tree-scapes. Towards the end of the week was a bit of a high spot : the point at which the various forks of the Eel River join together. This is near a place called Duckett Bluff which is noted for .... well actually it's noted for very little other than its bluff. The following day we came to the settlement of Redcrest. Checking out the website to find the scale of the place I was intrigued to see an option which promised me "ten job vacancies in Redcrest, Ca". This sounded good, here was a town of some substance if it could offer ten job vacancies in these troubled economic times. Alas, I was wrong yet again. I should have been suspicious when I checked out the first on the list which was a vacancy for an Army Chaplain in Iraq! 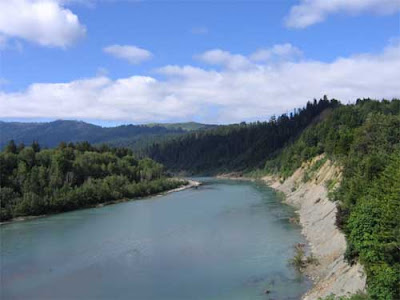 Before the week came to an end we travelled through Engelwood, Holmes Flat, Shively and Pepperwood and there was hardly a wooden hut between them. "They love their names, these Americans", I commented to Amy. She sniffed at something and we walked on. Alone. With just the Eel River and the trees for company.

Posted by Alan Burnett at 04:11 No comments: 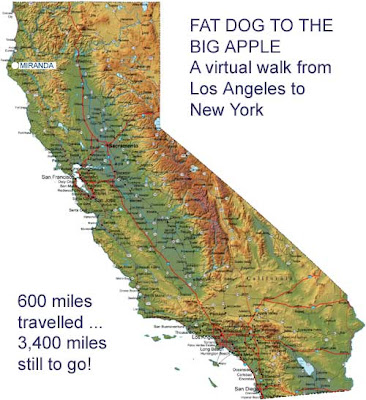 So we take the story up again where we left off in the tiny Californian town of Miranda. So far we have walked some 600 miles. Only another 3,400 miles to go!

Posted by Alan Burnett at 04:04 No comments: