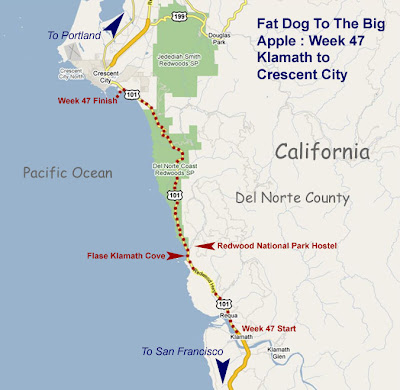 "I'm fed up of trees", I said to Amy as we walked north out of Klamath in the general direction of .... well, if truth be told, in the general direction of a lot more trees. We had been walking for what seemed like a lifetime. In our youth there had been Southern California beaches and cities, San Francisco shops and bars. But since we had come of age there had been trees. Big trees, wide trees, straight trees, gay trees. This United States was supposed to be a land of contrasts and natural splendours: a land of deserts, mountains, prairies and cities. But as far as I could tell it was a land of trees.  Amy pulled me to the side of the road so I could look down on the fine estuary of the Klamath River as if to say, "look there, it's a river not a tree, so shut up moaning" But all I noticed were the tree-lined river banks : like someone visiting the Louvre to look at the picture frames.

I cheered up a bit when we got to Requa a few miles further up Highway 101. Here is the historic Requa Inn and I am always a sucker for an inn. Dr Johnson once said that "the tavern chair is the throne of human felicity" and who was I to argue. So I went inside and pulled up a throne and ordered a drink.  Amy was less than pleased as she was tied up to a wooden post outside. The Requa Inn is one of those dog-unfriendly establishments. Amy suggested trying our usual trick of smuggling her in under my coat but she is too fat for that and I half suspect that she has picked up a few Northern Californian fleas of late. Her next suggestion was that we boycott the place, but decent inns are few and far between around here. So she was tied to a post with a bowl of water.

Refreshed and revived - well I was refreshed and revived and Amy was sulking - we pressed on until we reached the coast at False Klamath Cove. The name seemingly is derived from the fact that early sailors used to mistake the headland for the mouth of the Klamath River. The shore here is strewn with bits of old timber and what might look like - if you had a vivid imagination - old bones. Amy had a good sniff and declared that they were nothing but sea-smoothed branches and I suppose dogs should know about such things. We played a game as we walked along the beach as twilight approached : guessing what kind of strange animals could have given rise to such weird and wonderful bones. I suggested to Amy that one great old log was part of the breast bone of a giant chicken and she got quite excited about the prospect of this for some time. Ah, simple pleasures.
We stayed the night at the stunning Redwood National Park Hostel which is part of Hosteling International. I couldn't find any rules about dogs not being allowed but to be on the safe side I booked her in as my travelling companion and went for the more expensive option of a private room rather than a dormitory.

After we left the Hostel it was serious trees for the rest of the week. Big trees, wide trees, straight trees .... hang on, we've been here before. I said this phrase to Amy on numerous occasions over the next few days, but we hadn't been there before, they were just different trees that happened to all look the same. It was a relief at the end of the week when we came into site of Crescent City. A city, a real city (well a kind of little city, but what the hell). I would give myself a few days to enjoy city life and then press on. Just a few miles further north and we would at long last cross the State line and enter Oregon. "Do they have trees in Oregon?" I asked Amy as we sat on the harbour wall at Crescent City. She just yawned and ignored me.