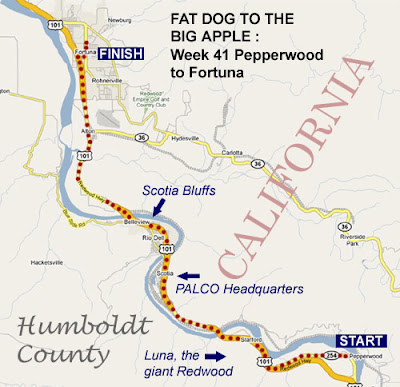 Amy and I were walking again, leaving the tiny settlement of Pepperwood in Humboldt County, Northern California behind and heading for Fortuna. In reality it has been weeks since we last took part in our mammoth trek from Los Angeles to New York City, but Amy - my soft-coated wheaten terrier - and myself inhabit a virtual world and are undertaking a virtual journey. So we can pick up where we left off, ignore the increasing gloom of the West Yorkshire streets and stride out once again in sunny California.
We were walking along the Avenue of the Giants, through mile after mile of majestic Redwood forests. For some weeks now we had been following the course of the Eel River as it sashayed its way towards the Pacific Ocean. The river was only a few hundred yards away from where Amy and I walked, but those tall trees masked its location and gave the impression that we we in the midst of an impenetrable forest. A few hundred yards in the opposite direction was Highway 101, but that again was hidden behind lines of massive trees. Amy, like any half-decent dog, liked trees. I could take them or leave them. I could work up almost as much enthusiasm for a tree once it had been processed into a decent-sized coffee table or a solid and respectable bar stool, than I could seeing it in its natural state. This attitude angered Amy no end and she decided I needed a lesson in environmental responsibility. So, as we passed the tiny settlement of Stafford, I was taken on a brief diversion to meet Luna. 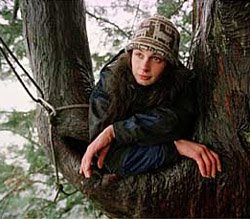 Luna is a tree: a very famous tree. Between 1997 and 1999, this 600 year old 180 foot tall Redwood was the home of the environmental campaigner Julia Butterfly Hill. She had taken up residence in its upper branches in an attempt to save it from the loggers of the Pacific Lumber Company who wanted to turn it into coffee tables and bar stools. Her campaign attracted nationwide attention, she became famous. Songs were written about her and films were made of her. And after 738 days of tree-sitting Luna was saved. 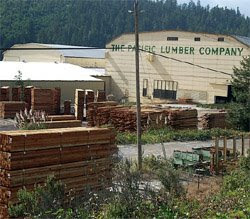 It was a classic story of the individual set against the corporate giant, conscience versus profit. A few miles further along the road, I got a taste of the scale of the corporate giant as I entered the company town of Scotia, home of PALCO - the Pacific Lumber Company. Scotia was founded in 1863 and from the very beginning was a lumber town. Some of the early loggers came from Nova Scotia and decided to name to town to remind them of their northern homeland. Throught the nineteenth and much of the twentieth centuries, the town expanded in line with the importance of the logging industry. If you had visited Scotia thirty years ago you would have found a thriving company town where the scent of sawdust perfumed each new day. Visit Scotia now and you will find a company town coming to terms with bankruptcy. The once-mighty PALCO filed for bankruptcy in January 2007 and the fate of the company - and to a certain extent the town - is currently in the hands of the American courts. By contrast, Julia Butterfly Hill is thriving.
Just north of Scotia you cross the Eel River and enter the so-called "Warm-Hearted City" of Rio Dell. Whereas Scotia is declining, Rio Dell is still thriving and the bankrupt lumber town has made an application to merge with its northern neighbour. Compared to many of the places we have been to in recent weeks, Rio Dell is quite a substantial settlement with paved streets, coffee shops, burger bars and a brace of churches. Amy stopped for a sniff and I stopped for a beer before we once again headed north. Just before crossing the ever-twisting Eel River we took a brief detour to explore the famous Scotia Bluffs fossil fields. Fossils of all sorts of things have been found here, I explained to Amy, including turtles, starfish and even the odd whale bone. Initially she seemed quite enthusiastic about a spot of fossil hunting but once she realised that the creatures in question had turned to stone many centuries ago, she grew weary of the task and refused to carry on digging. That's the trouble with Wheaten Terriers, they have a short attention span.

The final part of our walk took us along the wide expanse of Highway 101 - flanked now by fields and scrub land rather than by forests - towards the city of Fortuna. The original name for Fortuna was "Slide" but such a name didn't fit in with the ambitions of its nineteenth century inhabitants so it was changed to Fortuna. Since then, in a further exercise in spin, it has tried to persuade the rest of the world that it is really called "Sunny Fortuna : The Friendly City" which is all very well but carries just a hint of protesting too much. There is nothing that the 10,497 citizens of Fortuna like more than a good festival and therefore the pint-sized city plays host to an Annual Rodeo, a Civil War Festival, a river canoe race, and - most spectacular of all - an Annual AutoXpo, "a car show fueled by vintage rock 'n' roll, pink poodle skirts, white bobby socks, sunglasses and cool cars that are hot!" Amy turned her nose up in disgust at such a spectacle, but I thought that it sounded like good fun. Unfortunately we were four months too late. To console ourselves we stopped off at the Fortuna branch of MacDonalds. Amy was far more impressed with that.
Posted by Alan Burnett at 02:57 No comments: Links to this post